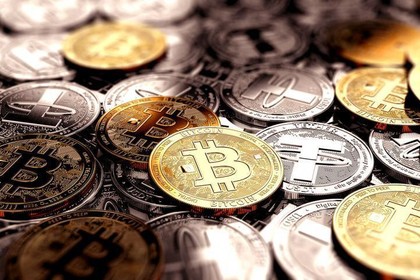 The Tether (USDT) asset finally stemmed the market slide yesterday, as a total of 90 million USDT hit the markets. There was no new printing, but only a movement of funds from the treasury. In an earlier transaction on Tuesday, Tether sent out 50 million tokens, followed by another tranche of 40 million tokens a few hours later.

This shrank the treasury to around 435 million USDT, still a formidable amount. The effect of the injections in the past few days was to stem the slide in the markets, and cause Bitcoin (BTC) to recover, along with all other coins and tokens.

Trading was vastly affected by USDT, where volumes went above the equivalent of $3.5 billion, or nearly 25% of all crypto market volumes. USDT is second only to BTC, which makes up more than 34% of crypto volumes. Compared to those numbers, altcoins are very thinly traded; hence the recovery in BTC easily sways their prices, starting to take out the coins of their recent deep lows.

Tether assets spread throughout the ecosystem, with USDT the most active, while Ethereum-based versions of USDT and EURT see much less trading and usage.

After a total of 140 million USDT injected in Bittrex over the last two days, BTC recovered to $6,350.90, returning to its usual levels of dominance. BTC market capitalization now makes 53.3% of the entire market. The previously growing influence of small-scale coins and tokens has been sliding for months, as those assets lose value faster than BTC.

Despite the recent drop in prices, BTC has added a net 58% year-on-year, while Ethereum (ETH) has failed to grow with the same rate, breaking even with levels similar to last year’s. The influence of the USDT injections seems to affect BTC first. In April and May, USDT flowed into altcoins, lifting up the prices, but now, the fixed-price token is coming to the rescue for BTC.

The price of $6,000 is seen as critical, as below it many mining facilities would go underwater, forcing the decision to dismantle mining farms.

But while USDT keeps its dollar peg, NuBits (USNBT) crashed from its dollar-like position, down to $0.12. Now the dollar-pegged coin, which uses a form of stabilizing trades through NuShares (NSR) is struggling to recover its peg. The recent market crash is the deepest for USNBT since June 2016. The coin has been drifting away from its dollar peg since March, but the recent crashes accelerated the slide.

Other fixed-price tokens, such as TrueUSD (TUSD) have kept the peg, while BitUSD (BITUSD) has risen to $1.11. Despite the numerous dollar-pegged coins using various mechanisms, the USDT token remains a leader in setting the pace of the markets.